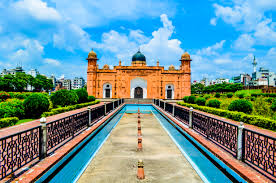 Lalbagh Kella rests in front of the Buriganga River. It is an incomplete Mughal fort that was designed in the 17th century. This fort was originally started by former emperor Subahdar Mohammad Azam Shah who was the son of Emperor Aurangzeb at the time of commencement. The structure remained incomplete because his successor, Shaista Khan did not continue the work. It was a combination of three buildings with two gates for a long period of time.

It displayed an exemplary architecture of defense and elaboration with extraordinary features. The northern portion of the fort consisted of utility buildings, stable and an administration block with a bastion on the southwestern corner. A beautiful roof-garden with a water reservoir and fountain options were part of the western portion of the construct. The residential section was in proximity to the mosque which made everything reliable, accessible and safe.